An introduction to Kotlin Coroutines

Asynchronous and concurrent programming plays an important role in the current world of Web APIs and microservices, where a significant part of our code is about orchestrating network interactions. Using traditional synchronous models, where threads are blocked while waiting for external responses, is not suitable for platforms where threads are costly, such as .NET or the JVM, or where there are special threads that can’t be blocked, such as Javascript or Android applications.

There are various programming models to handle asynchronicity, ranging from simple callbacks to reactive streams as a way to handle asynchronous sequences. Among these, the concept of future has seen broad adoption in multiple platforms (e.g. Promises and thenables in javascript, CompletableFuture in Java 8, Task in .NET), including language support via the async-await constructs, which are now available in languages such as C#, Javascript, and Python. However, instead of also adding explicit async-await support in the Kotlin language, their designers decided to go a different route and address these problems using the different and more generic, although rather old, concept of coroutines.

This guide provides a slow-paced introduction to Kotlin coroutines, as implemented via suspending functions, and their use to write asynchronous and concurrent programs. Starting from the ground-up, we show how suspending functions allows us to turn callbacks into suspension points that don’t break the apparent control flow. From then we move to creating and starting coroutines as instances of these suspending functions, taking a look at the underlying state machine and continuation interfaces. With this knowledge, we show how the async-await construct can be implemented as library functions without needing explicit language support. We also show how to achieve interoperability with other JVM asynchronous constructs, converting between them and coroutines.

In this guide we made the choice of starting on the primitive coroutine constructs and then proceed to the more high-level and shinny things that can be accomplished with coroutines, namely async-await. Our goal with this bottom-up approach is to provide a more solid framework upon which to understand all the feature provided by the Kotlin coroutine libraries.

Before we start, a word of caution: Kotlin coroutines are currently in experiment status, however, their use is highly encouraged by the language designers and constitute an important mechanism for anyone programming connected systems.

Let’s start our journey into coroutines with a simple plain function that takes some parameters, performs two steps and returns a value.

Calling this function from our main entry point function

The value between brackets contains the names for the thread where the log.info calls were performed: in this example all were performed on the main thread (the one that calls the main method). The following diagram illustrates the execution of simpleFunction, highlighting the fact that all statements are executed in the same thread. 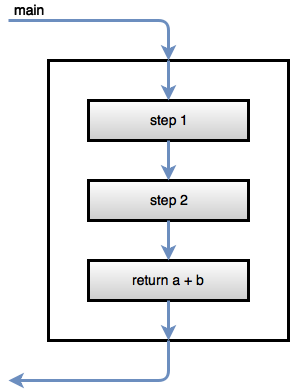 Now, suppose that between step 1 and step 2 we need to wait for something to happen, such as receiving a message from an external system or waiting for a time period to elapse. To keep things straightfoward let’s illustrate that situation using a simple Thread.sleep

Again, all the statements are run on the main thread, which blocks for approximately 1000 ms between step 1 and step 2. 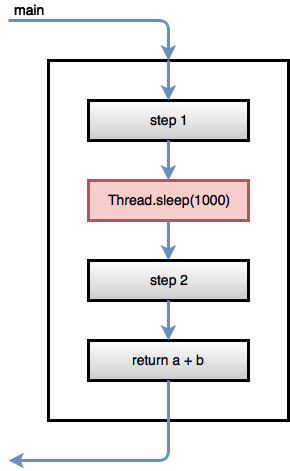 However, blocking threads may not be a good thing:

Kotlin suspending functions provide us with a way of handling these pauses in a sequential flow of statements without blocking the hosting thread. Namely, it allows a function

The first thing to notice is that a suspending function declaration is prefixed with the suspend keyword. However, the remaining function signature is unchanged: it still receives two integers and returns an integer. As a comparison, in C#, an async function that asynchronously returns an int will have Task<int> as the return type and not int.

Looking into the function body we notice that it remains mostly unchanged, except for the Thread.sleep call that was replaced by a call to suspendCoroutine.

This suspendCoroutine function, available in the kotlin.coroutines.experimental package, is used to suspend the function when it is invoked. It is one of the building blocks used by the coroutines libraries and has the following signature

The main thing to understand is the block parameter, which is a function receiving a continuation representing the resume point after the suspension. A continuation is an object implementing the following interface

Ignoring the context field for the moment being, a Continuation<T> has two members:

In our case, we just we use a plain Java ScheduledExecutorService

to schedule the execution of the continuation after 1000 ms.

The { cont.resume(Unit) } is just the Runnable passed into the executor.

The following diagram illustrates the suspension and later resumption of the suspendFunctionWithDelayfunction. 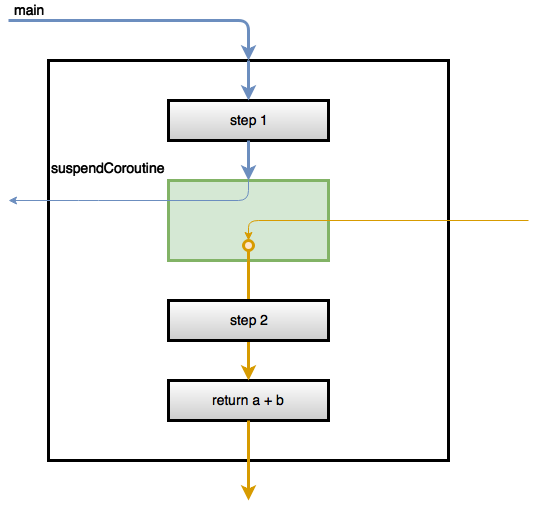 After the 1000 ms elapse, a thread from the scheduled pool (in orange color) calls cont.resume(Unit), resuming the execution of the suspendFunctionWithDelay. This suspension and resumption, including the switch between threads, is visible in the program output

Notice that the main function ends immediately after step 1, without waiting for the 1000 ms to elapse, because suspendFunctionWithDelay suspended its execution and returns to the main function. After the 1000 ms elapses, the suspendFunctionWithDelay resumes its execution in the pool-1-thread-1 (a thread from the scheduled pool) and step 2 is executed.

Using suspendCoroutine directly in our suspendFunctionWithDelay makes the code a slightly brittle to read, namely due to the nested lambda passed as a parameter. However, that can be easily handled by wrapping that behavior on a helper suspending function

However, the simpleFunctionWithDelay exhibits the remarking behavior of

Namely, note that both log.info statements are in the same block however they will be executed in different threads.

Using it we can create a simple startAndForget function

that starts a suspending function and ignores its result.

which produces the output already shown before

Notice how the result is 42 log message appears in the pool-1-thread-1 after the main function is terminated.

The following diagram depicts the complete picture, including the log.info with the suspendFunctionWithDelay2 returned value, as well as the final continuation. 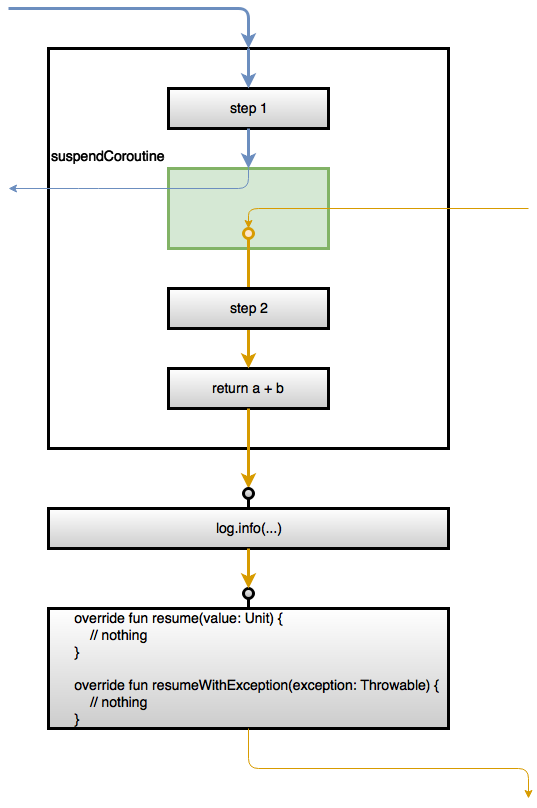 The continuation passed into startCoroutine allow us to do more interesting things than just ignoring the result. For instance, the following example uses a CompletableFuture to allow the main function to synchronize with the completable function termination.

With this, we can rewrite main to synchronize with the future completion. We use a blocking future.get() but on a real scenario we could also use a non-blocking future.thenApply.

Notice how the main function only ends after the suspending function completely terminate (i.e. prints result is 42).

Until now, and based solely on this simple example, all this suspending mechanics may seem a rather complex way to achieve something that could be done using a simple callback. However, the advantage of the coroutine mechanism starts to be apparent when the suspending functions are more than just an unconditional sequence of steps, such as the following example.

Accomplishing the same behavior using traditional callbacks would probably result in a much more complex recursive control logic, because the simple for loop construct could not be used anymore.

In this first part we introduced the fundamental concept of suspending function, as well as two core functions: