RFC 8252 - OAuth 2.0 for Native Apps, published on October 2017 as a Best Current Practice, contains much needed guidance on how to use the OAuth 2.0 framework in native applications. In this document, published originally as a post on https://blog.pedrofelix.org/2017/10/24/rfc-8252-and-oauth-2-0-for-native-apps/, we present a brief summary of the best practices defined on that RFC.

OAuth 2.0, published on 2012, introduced a framework with multiple different flows, including the support for public clients, that is, clients that don’t need to hold secrets. However it was still pretty much focused on classical Web sites and using this framework in the context of native applications was mostly left as an exercise for the reader. Some of the questions that didn’t had a clear or straightforward answer were:

The first major guidance to these questions came with RFC 7636 - Proof Key for Code Exchange by OAuth Public Clients, published in 2015. This document defines a way to use the authorization code flow with public clients, i.e. adequate to native applications, protected against the interception of the authorization code by another application (e.g. malicious applications installed in the same user device). The problem that it addresses as well as the proposed solutions are described on a previous post: OAuth 2.0 and PKCE.

The recently published RFC 8252 - OAuth 2.0 for Native Apps (October 2017) builds upon RFC 7636 and defines a set of best practices for when using OAuth 2.0 on native applications, with emphasis on the user-agent integration aspects.

In summary, it defines the following best practices:

To illustrate these best practices, the following diagram represents an end-to-end OAuth 2.0 flow on a native application 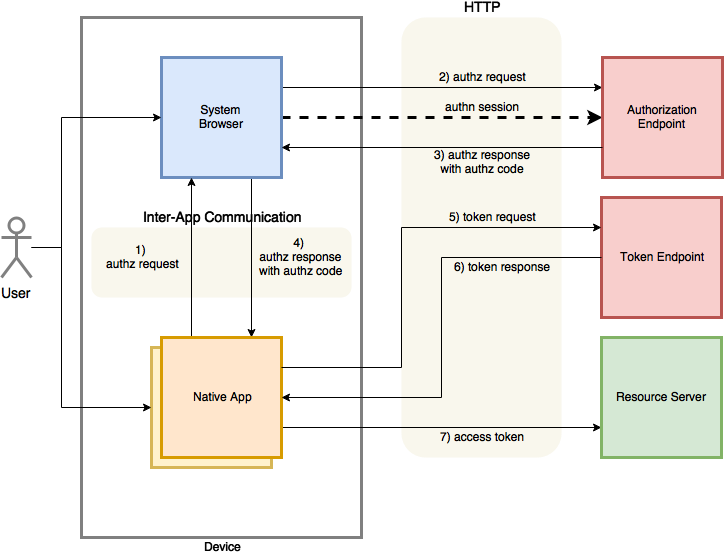 The AppAuth libraries for iOS and Android already follows these best practices.